The Town Hall was funded by a Limited Company formed in 1876 with a registered capital of three and half thousand pounds. 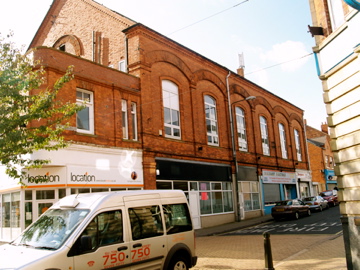 The foundation stone for the building was laid by the Duke of Portland on the 10th December 1888 and the town Hall was opened with an oratorio performance by the Sutton Harmonic Society early in 1889.There was a balcony extending the whole length of the south side of the building, which was surmounted by a tower in which accommodation was provided for a clock.

At the time the Town Hall was able to accommodate 1,000 people - I do not know what our Fire Prevention officer would say about these numbers today!

It was first rented to the tenant of the Denman’s Head Hotel.  We are not aware of the chronological uses of the Town Hall except what we have been told by the local people of Sutton.

We understand it was used as a Social Security Benefits Office with the downstairs Ticket Office used as a strong room for cash payments. Some research undertaken by one of the locals of Sutton established Sutton Amusements Town Hall was showing silent films up to October 1924.The last advert for the Town Hall cinema was advertised by the Notts Free Press on Monday 20th October 1924. Admission charges at the time for a performance of ‘The March Hare’, a comedy of complication and ‘The Dangerous Hour’, advertised as a Mighty Photo Drama of staggering thrills, was 6 pence, 9 pence and one shilling for the best seats, with one and three pence reserved.

We believe the Town Hall was used by the Town Estates for a period up until World War II, when it was used by the army for billets during the 1940s.From a letter found on the premises it states that fridges were kept under the staircase used to store the meat for the troupes.

Our current Dance Studio used to be the Main Kitchen and as the soldiers collected their meals in their tin plates they used to eat their meals in what is now the Main Ballroom.A sign saying Rialto used to be fixed to one of the turrets somewhere at the top of the Building and from this the Rialto Ballroom was established.

The name was subsequently changed to Regency Ballroom by Molly and John Buxton’s parents, who rented the property after the war and they laid one of the best dance floors in the Midlands.Molly and John Buxton carried on the Dance School from their parents when they left school as sweethearts. They retired to Cornwall after running a very successful Dance school for over forty years. They still run dances three days a week pulling in over 200 people each session.

You can subscribe to receive either our News, Schedule and Updates or just our Event Guide.

If you have any queries, please do not hesitate to contact us.